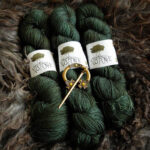 In Norse mythology Ragnarok is when the humans and gods collide in conflict and despair. It is the end of the world, in fire and battle, and almost all gods and humans die. The description of the end times does not sound great, there will be a winter lasting for several years, kinsfolk and friends will be slaying each other, there will be pestilence, and giant wolfs eat the sun and the moon leaving everything in darkness.

But after all of these horrible events a new world will rise up. A few of the gods have survived and are meeting again on Idarvollen where they reassemble the golden cheek pieces they find laying on the grass. Of the human race a couple named Liv and Livtrase have hid from the mayhem seeking shelter in Hoddmimes forest, nourished by and surviving drinking the morning dew on the threes. These two are the beginning of a new line of the human race, and they will live a carefree life in a fabulous golden hall.

My friend Tuva of Norne Yarn seeks inspiration from Norse mythology when developing her genuine colourways. Through the last months of lockdown, Tuva and I have been working on a collaborative project, a special Knit with attitude colourway, need I say, it is of course green. The deep hues, almost borderline black, remind us of the depth of colours only found in the deepest in 'the middle of nowhere' forests. And what can be more beautiful and uplifting than the promise of a new world? Needless to say, this yarn specifically speaks to me on so many levels, and I hope you will love it as much as I do.

The secret is out and I'm over the moon presenting to you our very own Hoddmime's Forest, with all of us slowly but surely coming out from a year of 'despair', the timing seems more than apt for new beginnings and the rebuilding of our 'new world'.

Hoddmime's Forest is available in Tuva's luxury blend Merino/Silk/Yak Singles which properly pays tribute to the depth of this colour, along with the other stunning shades that she has developed. It is a 4Ply weight yarn with a good twist and a smooth finish, the lustre is almost magical, creating a lovely stitch definition as you can see here in the sample George knit up in a week, the pattern is Tuva's Arrows by Julie Knits in Paris, a stunning example of how far one single hank will take you.