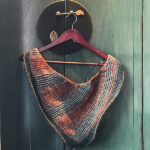 After a really long winter, it honestly feels like we skipped spring all together, the summer heat has finally arrived to London. This is the time of year where I will gather all my 'woollies' give them a good rinse, a new blocking, and zip them up to be locked away for hot summer days and the dreaded moth season. It is also the time of year were I will go through my on-the-needles projects and decide which ones that have earned their survival or not ...

You see, I've never been a monogamous knitter, I'm like a moth to the flame, I see something new and shiny, and I will immediately abandon what I am working on and cast on. Leaving me with a good pile of not yet completed or soon to be finished projects. Hence my addiction of project bags, you just can't have too many when they are constantly used to store multiple projects ... However, this last year turned out to be somewhat different in many ways, and last summer no critical evaluation of projects happened. Housebound and in isolation, as many of us, I turned my attention to the close and familiar, to what I could control, and I decided to get my knitting into shape. I did! I finished one abandoned project after the other, some had been left for years, the oldest one I picked up was a poncho I started more than five years ago. I worked through the pile, one after the other, and I actually reached the point where I had just 'the one' project left on my needles soon to be finished.

As the restrictions of the pandemic loosened, I'd been given my first vaccination, and some sort of normality seemed possible, my shoulders and stress levels lowered. And so did the high standards I've set for my self imposed structured knitting regime. After almost a year playing the 'I'm going to get myself so organised and finish all my projects'-game, oh did I fall deep deep down that rabbit hole, I've now failed completely. With numerous projects being cast on simultaneously, I've yet again gone through and taken stock, these are the ones to survive, and most of them are almost done. Let's see how long it takes me to actually complete them ...

My Shifty by Andrea Mowry

What knitter doesn't get seduced by the stunning designs by Andrea Mowry, not to mention the alluring pictures that accompany them. Her Shifty (Ravelry link) was released in January 2019, and as many others I threw myself onto the new craze.

You might have been taken back a bit about my statement above 'deciding which project that has earned its right to survive' indicating that I will happily rip up a project if I decide it hasn't. This is because I am much more of a process knitter rather that a product knitter, meaning that the knitting journey is often much more important to me than the finished object itself. This also means that I will rarely play buy the rules, I will see a project that I think is absolutely perfect and can completely see myself wearing, but then go ahead and alter it all up choosing different fibres, different needle sizes, shaping, you name it ... sometimes my experiments works, but sometimes they don't. My Shifty is an example of where I think it absolutely did!

With my Shifty I changed the direction completely, where the original is worked in a sport weight wool, I chose a mixture of Nurturing Fibres Eco-Lush (cotton/bamboo) a heavier 4Ply in the Vanilla, Persian Red and Baltic, and Eco-Bamboo, a lighter 4Ply in Patina (just because I adore the colour and wanted a splash of that as well). Knowing that this would make for a 'heavier' fabric with a bit more drape, still wanting to keep the fitted shape I chose to make it in a size smaller than my measurements but stick to the same needle size. I just dug this our from its bag realising I practically just have a few more rounds and the cuff to go - can you believe it?

My Milkweed Pullover by Pam Allen

Published in the Summer 2020 issue of Making - Simple, I completely fell in love with this summer top and onto my needles it went ...

The Milkweed (Ravelry link) is worked in a quite heavy 4Ply linen, but I had been playing around with this idea of combining our Växbo Lingarn (which is slightly thinner) with Hey Mama Wool's Ahimsa Silk, and held together these two would make me obtain the perfect tension. I chose the colours Pale Bleached (linen) and Lipstick (silk) which gives me a marled peachy pink effect. Off I went, and I can't tell you how much I love the result!!! So why isn't it finished yet you may ask. Well, it ended up in the naughty corner! As you can see, I've got about half a sleeve left to do, but ran out of the silk. It was put away for me to decide on how much the sleeve length mattered. The silk is quite expensive and I wasn't sure if I could justify opening a whole new hank just to finish the sleeve. One hank had brought me to this point, so opening another one would leave me with a lot of left overs. Looking at it now (you have to excuse its wrinkly appearance as it has been shoved into a project bag and left there for nearly a year), I've decided that the sleeve length is not as important to me, and I will rip back the first sleeve a bit and use that to finish the second sleeve, making them sit just under my elbows rather than three quarter length.

My Thistle by Anna Johanna

Comes February this year and the launch of the most anticipated colourwork book from Anna Johanna Strands of Joy and the cover design Thistle immediately called my name. Thistle is a cardigan knit in the round, with the shawl collar being picked up and then for the arm holes and the front to be steeked.

This might come as a surprise to you, me being a Norwegian knitter, but I've actually never done steeking before. So with this one I sticked to the rules, just turning the colour palette to something completely different. I chose to use the Garthenor Preseli in Harbour, Rigging and Sycamore, the softest woolly yarn you can imagine still with plenty of grip to make that steeking work as a dream. Some say that when using this yarn you can even make the cut without securing your steeks, but since this is the first time I'll have a go I don't have the courage to as of yet! As you can see I've picked up and finished the shawl collar, and I have secured my steeks, so the next step is to cut them open. I did feel I needed a bit of emotional support doing this, so George has promised to (mentally) hold my hand and we tried to come up with a good day when we're both in the shop to do it. BUT then this happened ....

This is my current project, which also is a first one for me, a mystery knit-a-long, and I am completely obsessed. I have been a fan of Susanne Sommer's designs for a long time and when she announced her upcoming Mystery KAL, I knew that this was a project I would actually complete. Also, with the clues being released continuously once a week, there is always something new to keep my attention - it basically keeps me on track. (Imagine that!)

In preparation for the KAL, and in conspiracy with Susanne we came up with some pretty awesome kits for everyone wanting to follow along. I had my mind set on the Fruit Cocktail colour combo, as I absolutely love the summery splash of colour, but with the said going through my 'on the needles' my plans were yet again completely turned up side down. As I was ripping up a project that didn't make the cut, it struck me that the yarn could be perfectly used for this KAL. I'm using a mix of Black Elephant Merino Singles in Henna and Utopia, and Norne Yarn Merino / Silk / Yak Singles in Ice One Night Old and Irish Gold, both yarns I've used together before and find that they compliment each other beautifully. With the third clue being released today I'm so ready to keep going. It very well might be so that the last project for me to cast on, will be the first to be finished.