Why Knit with attitude

I refer to the email I received today.*

Knitting is for myself and many others a creative art and very therapeutic. However when knitting is used for political statements and activity it takes away from the magic and efficacy of this beautiful craft. I would urge you to think carefully about the statement that you and your group have created and ask yourself if your group intention falls within the true and virtuous spirit of the knitting tradition.

*Knit with attitude's July newsletter inviting to join in on the #eastlondonknitters #sayballstotrump project.

Thank you for writing to me expressing your concerns about Knit with attitude's recent political statements and activity. The large majority of responses we received on the #sayballstotrump project have been overwhelmingly positive, but a few negative ones have been abusive and rude statements on my social media feed, and unlike your email they are worthy of nothing but to be ignored. I do understand that you must be a passionate knitter and I really do appreciate your email as it does open up for dialogue, but maybe most importantly, by writing to me you served me an opportunity to reflect on and remind myself of the very values that constitutes Knit with attitude.

I wholeheartedly agree with you in that knitting is a beautiful creative art, however I also strongly disagree with you in what constitutes this wonderful craft's magical and virtuous qualities in that I believe these to reach much further than what you describe. As an art knitting fulfills many purposes. We can all find serenity and inner peace by admiring a beautifully painted scenery, similarly as knitters we find joy in admiring beautifully knitted pieces where particularly difficult techniques have been used. But it is the though provoking mind altering paintings that open up to dialogue and force real change, and similarly, for myself and many knitters knitting is also a powerful tool of expression.

Knitting used for political action has long roots coming to the true and virtuous tradition of knitting. In the US as an example, from the American Revolution in the 1760s, throughout the abolition and women's suffrage movements, to what we are seeing today with the #pussyhat project and #metoo campaign – knitting is a symbol of activism that dates back hundreds of years closely linked to issues concerning race, gender and class. There are lots and lots of resources online about the political history of knitting – from academic research papers, historical documents and more contemporary news articles – this is a topic you can really dive into if you feel intrigued to learn more about it – it is truly fascinating I promise you. Personally I feel both grateful and privileged to belong to a community with such a proud history in standing up against injustice and which communicates virtues as open mindedness, acceptance, equality and inclusivity. 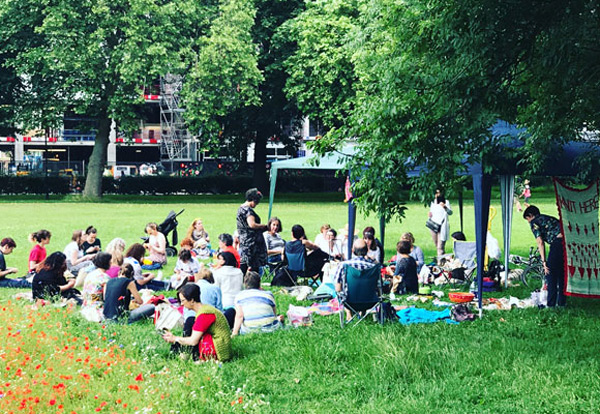 And it exactly this it all boils down to – the knitting community! I wish we could, but Knit with attitude really can't take credit for what you refer to as 'your group' and their statements and activity as the #eastlondonknitters #sayballstotrump protest, neither can the other two London yarn shops involved in the project. But all three of us are immensely proud and happy about helping to encourage and facilitate such activity and engagement brought forward by the very passionate knitters in our community – they are not one defined group belonging to anyone. We, the three shops forming East London Yarn Triangle, collaborated in arranging a pic-knit on World Wide Knit in Public Day, which had a wonderful turn out bringing all these knitters together engaging with each other. And this is where the true magic happened!

President Trump's visit had evoked a lot of emotion throughout London, also amongst those of us who attended the pic-knit, and together we came up with the idea about a hand knitted banner with witch we could make our voices heard against hatred, sexism and injustice joining the forthcoming Trump Visit Protest March. This initiative quickly spread on social media and soon the project reached far beyond East London. We received rectangles from all over the world, hand knitted in soft wool and decorated with humour underlining the powerful message all of these knitters were so eager to express. What was created was this beautifully constructed banner – an absolutely amazing piece of art! Through the #sayballstotrump project knitters from all over the world became an 'East London Knitter' claiming ownership of the statement made.

I have to admit, for me personally, the day of the protest was emotional. I felt so empowered and inspired to be part of such a community project, everyone who joined the project were linked into the very weave of the fabric that posed the message, 'joined together' in solidarity with the statement we all made. Together with 250 000 others #eastlondonknitters gathered and marched thought the streets bearing our message on behalf of every single knitter and crafter that joined the project. It was a wonderfully festive, happy and diverse protest march! 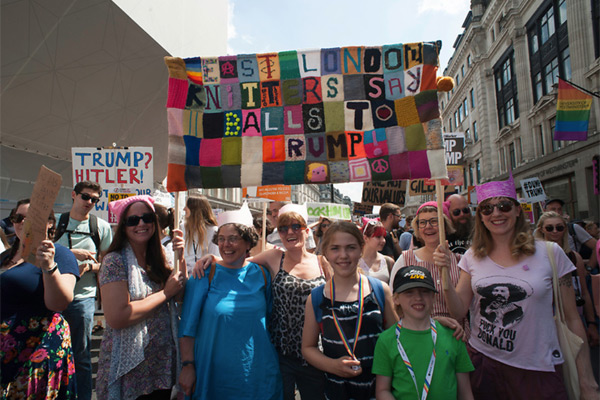 For me knitting is political by its very nature, involving a huge variety of political issues. From making sure that techniques, historical records, traditional patterns and knowledge are being passed on and maintained through education in schools and public libraries, to recognising the therapeutic qualities of knitting and campaigning to have them academically researched or working to introduce knitting as a tool for motor skills recovery or mental health issues – and I've already mentioned the knitting community as a whole expressing values as open-mindedness and inclusivity which directly translates to anti-racism, anti-fascism, and anti-sexism – many many knitters express opinions about these issues every day through their act of knitting involving topics which are highly current and heavily debated world wide and that also involve educational, health care and gender policies on a very practical more local level.

Knitting in the context of history and activism is something I've been thinking carefully about throughout my adult life – and the want to express something I feel very passionate about through my love for knitting was what spurred me into setting up Knit with attitude nearly 9 years ago. I was incredibly inspired by the environmental campaigns that was happening at the time especially the 'Knit a River' project initiated by Gerard Allt and his London shop Iknit in conjunction with the charity WaterAid in 2006, fascinated by the attitudes expressed using knitting I really wanted to become part of this scene, hence the name Knit with attitude! Yes, it is a business, it is a yarn shop of which I am trying very hard to make a decent living, but as one says – a small business is always an extension of of the person behind it – and this is also the case with Knit with attitude. I did choose a difficult route for myself and my business as Knit with attitude is a yarn shop specialising in ethical, sustainable, and cruelty-free yarns, it is my intention and hope that to run a business with such a strong ethos will be able to prove sustainable at the same time as it takes a clear stand coming to consumption and materialism, the environment, animal care, modern slavery and fair trade.

I am so sorry that this turned out to be the longest email response, but after all in your email you are questioning my personal moral standard and this struck quite a few chords which I feel needed to be explained. Also, your email is well written in a polite and respectful manner and I do believe that you deserve a proper answer. But there is one more thing your email made me aware of, and which I would like to thank you for making me realise this as it is an issue which everyone at Knit with attitude needs to pay more attention to. Although our ethos is held so highly here in the shop, the fact that you as our customer are unaware of this might be the case of it being so obvious to us spending every day in the shop that we have fallen behind in communicating our political beliefs clearly to everyone. We like to think that Knit with attitude is a yarn shop open for all and inclusive of everyone no matter their gender, race, sexual orientation, political or religious beliefs – and it is heartbreaking to think that someone would feel unwelcome based on our activist engagement. I am also sorry if this comes as a complete surprise to you and leaves you disappointed - still there can be no doubt about this – Knit with attitude is a business that has strong political views.

As I want to make our stand very clear and as I see the need to communicate this more widely I have decided to publish your email (anonymously of course) and my response on the Knit with attitude blog so that more people can see where KWA is coming from and what we are all about. Again, I am grateful for the opportunity you gave me to do this and I do hope that we will see you again whether it is online or in store.

I wish you a truly wonderful day,
Maya