As knitters become more conscious of where their yarns come from, we are getting more interest in what are often categorized as vegan yarns. These are yarns that do not come from an animal. We've already talked about the most obvious ones, cotton and linen, but there are a few others that we carry in the shop as well that are less well known. These are soy and bamboo.

Now, the question is, how the heck do you get a yarn out of soy and bamboo?! and what's it's impact on the environment?

Soy and bamboo are both synthesized fibres, which means that they start as a natural product, and are chemically altered into fibres in a lab. Bamboo especially has been heralded as the new natural wonder fibre due to it's renewability as a plant, but it's journey from farm to knitting needles is not without it's pitfalls. There is no denying that the process of producing these yarns is a chemical one. The fibres are broken down with sodium hydroxide and carbon disulphide into a viscose cellulose solution, which is then pushed through spinnerets. The fibre then solidifies into the fibre that can then be spun into yarn. Luckily, with newer technology this system is quoted as being a 99% closed loop system, where the chemicals are recycled and re-used for each batch of fibre.

Soy fibre was first developed by Henry Ford (of Ford cars) in the 1930's as a synthetic alternative to silk, but it only made it to market recently. Unsurprisingly then, soy yarn has a lot of similarities with silk when it comes to how it looks and behaves. It has incredible lustre and shine, with great drape. Soy fibre is made as a byproduct of other soy product industries such as food. After the soy bean is used it is left with high levels of amino acid lysine. These amino acids are broken apart and lined up again to form the threads that form the yarn. This means that soy yarns can actually be classified as protein fibres in the same category chemically as wool and alpaca!

All of our soy and bamboo yarns come from South West Trading Company. The company is family run and pride themselves on being one of the first companies to develop these fibres for the handknitting market and staying at the forefront of the industry. The yarns come in a range of super bright saturated colours that are just perfect for warm weather knits. Think flowy garments that have a lot of drape and some positive ease. We love the idea of knitting up Emery from Pom Pom Quarterly Issue 9 in either yarn for a luxurious summer shawl. A project perfect for our Summer KAL! 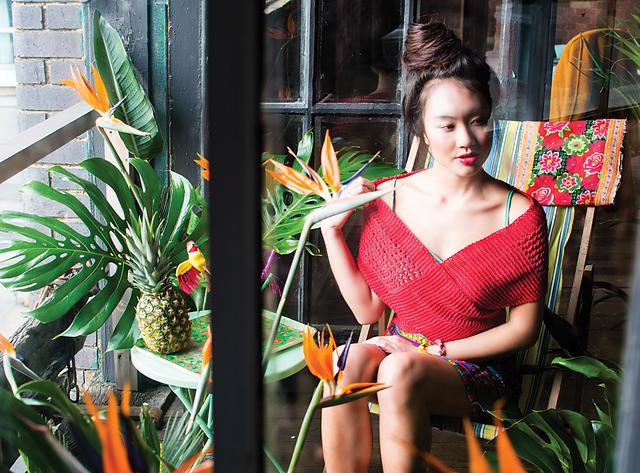