I've known Kaja for a few years now, one of the very first customers I had coming through my doors when setting up my shop and with time a dear friend, and I've had the pleasure of observing her approach to knitting. A process I find both fascinating and amusing.
You see, where most of us decide on what we want to make and then choose the yarn suitable, Kaja turns this the other way around and starts with the yarn. Watching her discover a new arrival on the shelves, holding it in her hand, stroking it, studying it, it is almost like I can hear her wording a question - 'Hi, nice to meet you, I wonder what you would like to become?' So I threw this idea at her, and asked her to share her creative journey with us on the blog. I am so happy she accepted the challenge, over to Kaja...

Context matters to me. When one day in late November 2014 Maya threw a skein of Rowan Fine Art Aran yarn at me and said ‘let it talk to you and then review it on my blog, please’, I immediately engaged with the yarn’s gorgeous reds. Maya offered that I could pick a different one of the eight shades the Rowan Fine Art Aran comes in, but I stuck to the red Azonto, because the yarn is ‘made in South Africa’. I have never been to South Africa, but the red hues of the yarn resonated with the images of Africa that I have seen and engaged my imagination. 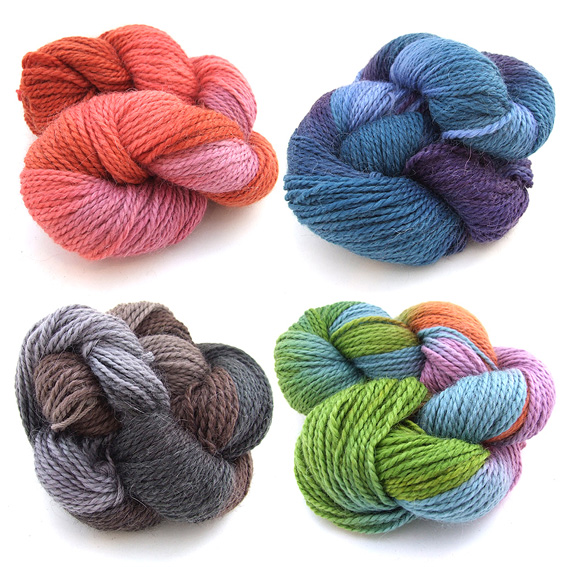 Maya observed me cuddling the yarn in my hands with a twinkle in her eyes. She was clearly curious to see what I would do, as I regularly come to her shop, pick a yarn and then, over a couple of weeks, develop a project based on what the yarn ‘tells’ me. Usually, I make garments. It’s an experimental, slow and labour-intense process, full of error and fun! However, this time I hadn’t picked the yarn myself.

It is sometimes said that constraints nurture creativity. The most important constraint in this project was that the Rowan Fine Art Aran is made with kid mohair, super fine alpaca and mulberry silk. This makes for a lovely sheen, but I suspected that it would itch. I am extremely sensitive to all kinds of wool and have never been able to wear mohair on my skin. My whole family is like that and a lot of my friends too, so I usually go for merino, silk, cotton or linen. Making a hat or a scarf from the Azonto, which would have been the easiest choice and quite appropriate for the approaching winter season, was therefore not an option for me.

For a while I thought about making a shoulder bag, lined perhaps with a Knit with Attitude cotton bag for sturdiness. I played with the idea of using Tunisian crochet, thinking that this technique would produce a solid fabric. The two dimensional colour pattern of my Tunisian crochet sample looked indeed quite stunning, but I soon realized that it didn’t work for my intended purpose, because of the yarn’s high elasticity. 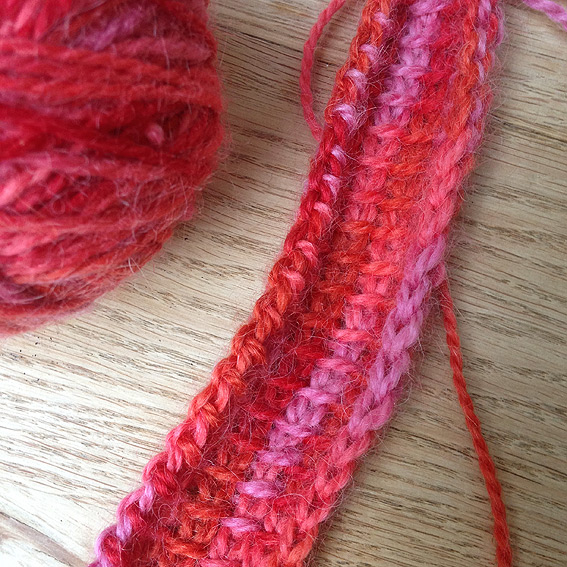 All the while I kept musing about Africa, about the women (I assumed) who had dyed and spun the yarn, and about the pigments that were used for the dye. In my mind I saw a group of women in an outdoor workspace, maybe seven or eight, of different ages, moving unhurriedly about as they were mixing powdered pigments with water in wooden or earthen jars. The scene was intensely illuminated by the African morning sun of my imagination and the powdered pigments of the Azonto shade stood out against a dark brown earth. This made me realise that the yarn was asking for a dark monochrome contrast! For a few days I considered leather as an option. I had never worked with leather, though, and couldn’t spare the time to learn to do that. With a sigh I eventually scrapped the whole idea of making a bag as being too complicated.

Thankfully, the muse kissed me a few days later, handing me the image of a tailored dark brown cardigan, exuberantly accentuated with the Rowan Fine Art Aran at the cuffs, the hem and the collar. The style reminded me of a seventies suede jacket with tasseled fur collar and cuffs.

So I went back to Maya and got four balls of Excelana 4 ply luxury wool in Persian Grey, a perfect colour match for the Azonto shade. The Excelana is made in Devon, from 70% Exmoor Blueface and 30% Bluefaced Leicester and makes a highly defined stitch. 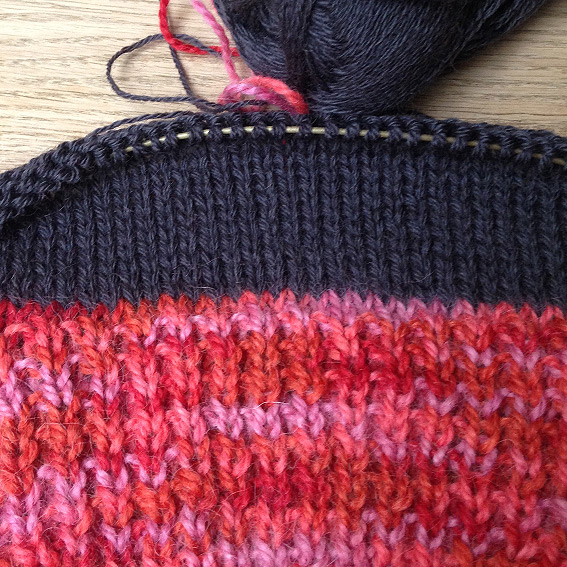 I liked the idea of bringing Africa and the UK together in my project. It seemed to add a dimension of cultural exchange and now, a few days before Christmas, I was finally ready to go. Starting with the body in the Persian Grey Excelana, I used a 5.5 mm circular needle to produce a simple raglan shape, top down. For the Rowan Fine Art Aran accents I used a circular 6.5 mm needle and alternated single rib rows with knit rows to achieve the lush look I was after. 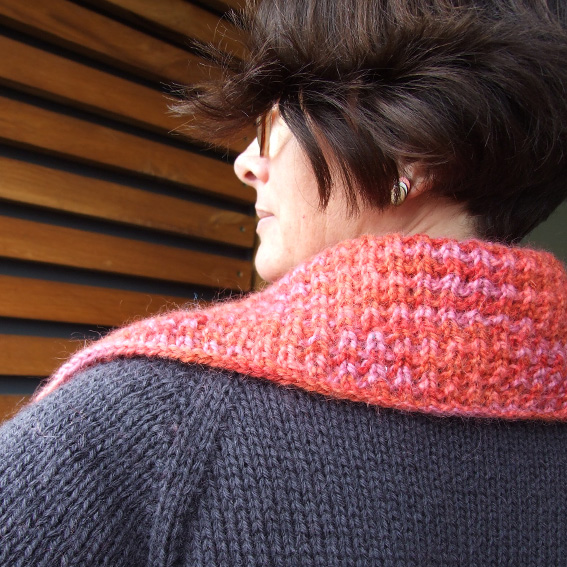 The wide collar - contrasts in structure and colour.[/caption]

While both yarns were equally a joy to knit with, the rich hues of the Rowan Fine Art Aran put me almost into a trance as they generated unexpected ‘patches’ of pattern– a ‘hard-to-put-down’ yarn! On the last day of 2014 I finally put on the finished garment and stalled on the spot: the collar was unbearably itchy! But the cardigan is far too beautiful for this to be an issue: I always wear it with a top that covers my neck and I have developed the theory that once it has shed its fluff it will also stop itching. Its luxurious warmth is unmatched by any other garment in my closet and it fits me really well.

In the end I used almost two skeins of the Azonto and five of the Excelana – below is what I have left over, to give you an idea of what you can get out of a skein.

Out of curiosity I tried to find out more about the collaboration of Rowan with the South African wool makers, but surprisingly, the only place that mentioned the origin of the yarn as a product of the Cape Mohair Spinners, was Knit with Attitude’s website (!), and once again I feel proud to be Maya’s friend as she makes an effort to source and research ethically produced wool and to tell people about it. 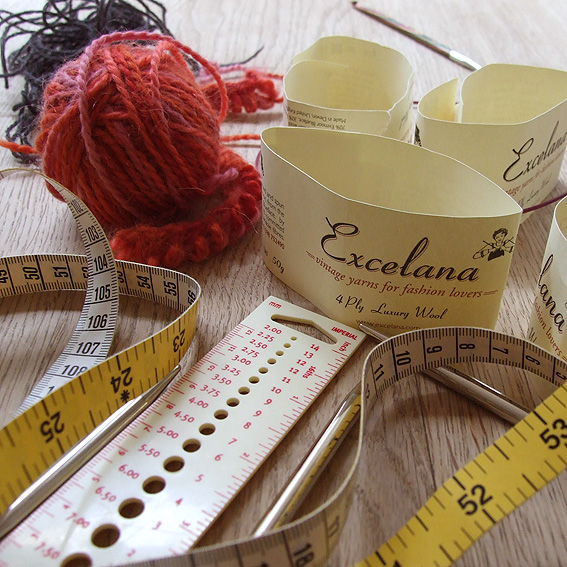