Do you have everything sorted for Christmas yet? Everything neat and dusted, parcels bought and wrapped, festivities planned? I'm not even close! I mopped the kitchen floor last night after getting the kids to bed, and that's about it. No parcels sorted, no plans for the holiday, I've knitted five rows of the sweater that was supposed to be hubby's Christmas gift and now I've resorted to wrap the whole thing, needles and all, with a card saying 'to be continued'. Phew, this really is the busiest time of year for me, and to be honest, if it hadn't been for all my lovely customers popping in sharing their Christmas spirit with me, I'm not sure whether or not I would cope.

Sometimes it can be hard gaining that pre-Christmas spirit, and with our hectic lives, the pressure of having everything sorted and the hassle of everyday life it is easy to miss what it all really should be about. I just found this list the other day, which I think is a good reminder to all of us.

This is probably the last blog post I'll have time to write before the holidays, and strategically I probably should have filled it with 'last minute gift ideas' and 'Christmas projects for you to buy', but I wont.(I have, however, made a little wish list over at Pinterest that you can have a look at if you want to, and I'm doing a discounted offer every day on the FB/twitter pages) You see, there is this little project that I've actually managed to complete, it was for the shop window so that is probably why. And this little thing gave me more Christmas spirit than anything else so far, so I decided to share it with you.

These Christmas baubles are done in a blink, they look so cute and furry that they have to put a smile on your face, and they are pretty too! Basically what you do is to cover any old bauble in knitting, I made mine using one ball of Luzia by Louisa Harding and one ball of Faerytale by Du Store Alpakka, one strand of each held together. I found that the Luzia by itself was too slippery for my bamboo needles, and that's why I combined it with the Faerytale. I also made a few baubles in just the Faerytale, two strands held together. So far I've done 9 of them and there is still yarn left over so one ball of each yarn is plenty.

I used a set of four 5mm double pointed needles for all the baubles, adjusting amount of stitches according to small or larger baubles. The pattern described below is for the large baubles where I cast on 9 sts, for the smaller baubles I cast on 6 sts. The formulae is the same for any size baubles, and is fairly easy to adapt no matter how many stitches you cast on, I guess the easiest way to explain this is by showing you the pattern for the large baubles, and you'll quickly see the regularities.

Right, so this is how I did it.

This is where I put the bauble inside it's 'stocking' to see if I've reached the middle if I haven't I'll do another set of increases followed by one knit round, if I have I'll continue like this: 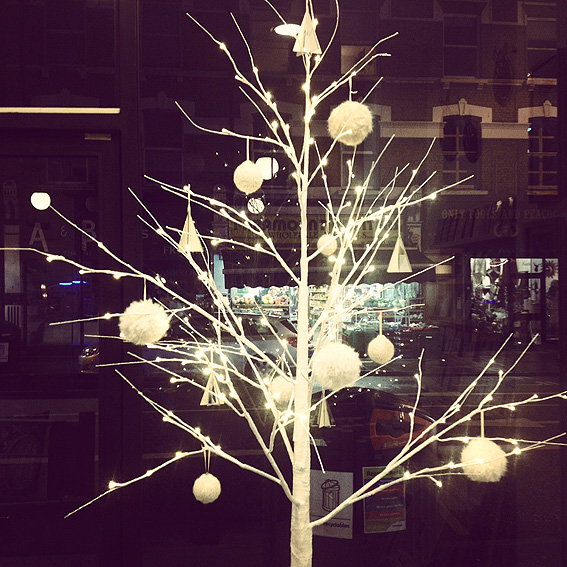 Now pop your bauble inside it's stocking before finishing the last round of decreases. Since the stocking is quite stretchy this should be fairly simple to do, but if you leave it until after the last set of decreases the opening might be to small.

Cut yarn, using a darning needle thread the end through remaining stitches when removing the needles, pull tight to close the 'hole' and weave in the end. Pull the yarn end at the bottom tight to close that hole too, before weaving it in.

And that's it! Happy Christmas!!!

PS The last two pictures of our Christmas tree at night was taken by my lovely house mate Jessica - Of Cabbages & Kings.